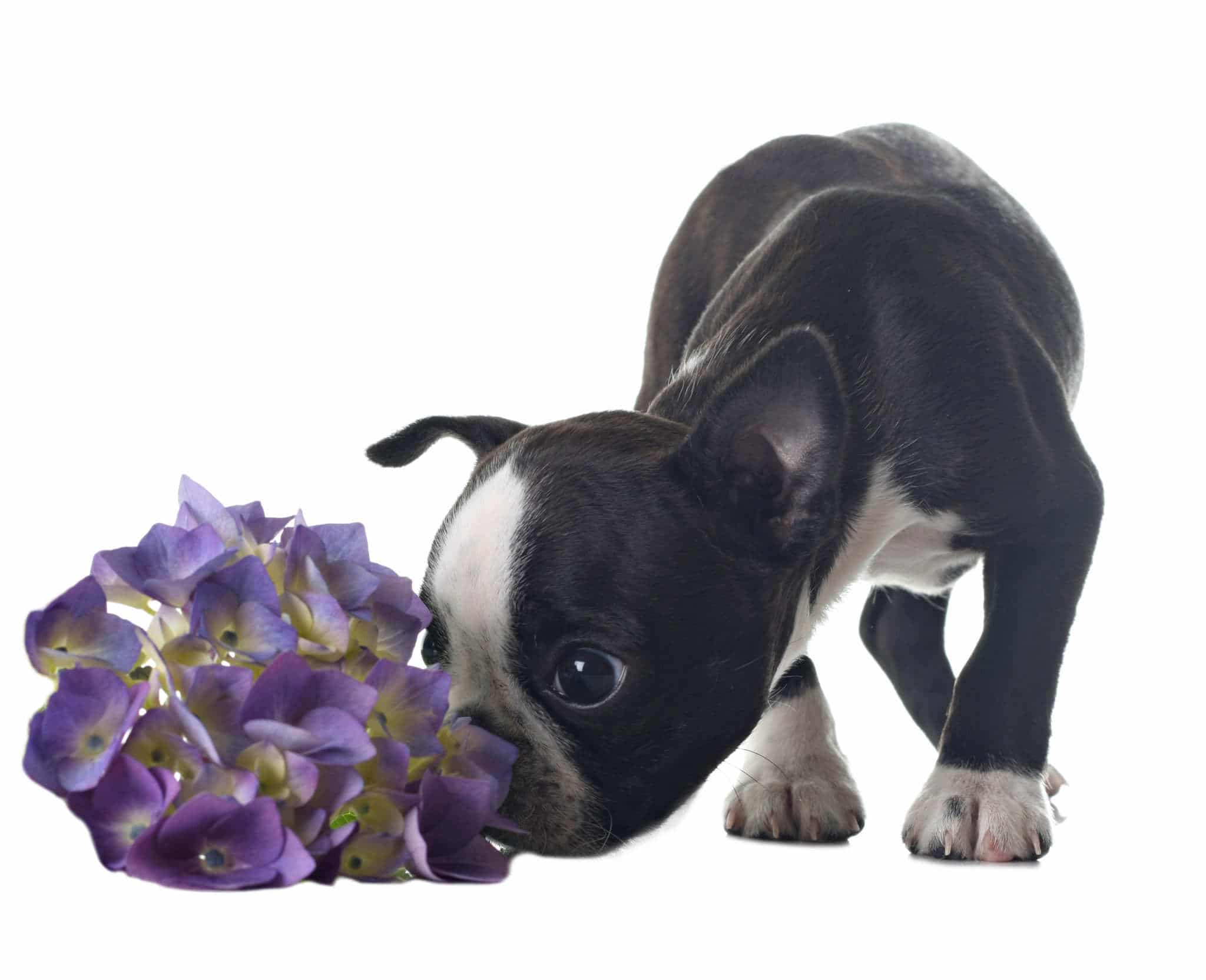 Secrets of a dog’s nose

A dog’s sense of smell is much more sensitive than that of humans. To see the difference, let us look at the numbers. Humans have about 5 million olfactory receptor cells spread over the area of 5–7 cm2 of olfactory epithelium. A domestic dog has from 70 to 230 million cells on the area of about 150–170 cm2, depending on the breed. A domestic cat has from 60 to 65 million cells. The olfactory bulb in dogs has up to 40 times more surface area than in humans [1,2,3]. Since we, humans with only 5 million cells, can smell so many scents, how is it with dogs?

The sensitivity of the sense of smell in dogs is used, inter alia, in osmology (a branch of forensic technology dealing with securing, storing, and examining human scent traces with the use of specially trained dogs) and in detecting traces of drugs or explosive substances. Dog noses also have a great predisposition to detect diseases, such as prostate cancer [1], melanoma [2], lung cancer [3], epileptic seizures, and hypoglycaemia [4,5].

Another property of the dog’s nose is its adaptation to sniffing. Breathing and sniffing separate into two distinct pathways. This means that dogs are able to keep scent in their nose even while breathing. When they exhale, the way they expel air through the slits of their nose enables them to capture new scent molecules and detect more substances during sniffing. During inhalation, the air passes through the upper part of the nasal cavity reaching a special porous bone structure, which deposits and accumulates scent molecules, preventing them from being blown out during exhalation. During exhalation, air travels through the lower part of the nasal cavity [12,13,14]. Interestingly, dogs use each nostril separately for smelling, transmitting information to separate hemispheres (left nostril corresponds to the left hemisphere, and right one – to the right hemisphere). The smell of food and other pleasant and affiliative scents are inhaled with the left side, while the smells of danger (adrenaline, vet odour) and new, unfamiliar substances are inhaled with the right side [7].

Olfactory coding is a process whereby information about olfactory stimuli is coded. It refers to all cognitive processes involved in the perception and recognition of a scent, and the formation of negative or positive emotions. From the human point of view, the latter, occurring in the amygdala in the brain, plays a crucial role: owners, trainers, or behaviourists can use scents in everyday life – in therapy, at work, playing, and resting.

Olfactory training is a strong physical and mental effort for your dog. It is an extremely important therapeutic tool with a variety of uses. It can be used in hyperactive dogs, dogs with depression, obsessive-compulsive disorder or anxiety disorders, or simply to fight against boredom. You can use traditional forms: tracking, tracing, or a free play and fun, such as “hide & seek” (hide a treat or toy and let your dog seek it), or use scents in a number of other ways. Research has shown that dogs respond very well to the smell of lavender. It has a soothing effect on them. An experiment investigating the effects of lavender on dogs’ travel behaviour found that dogs spend significantly more time resting and sitting and less time moving and vocalising [15]. Another study conducted on dogs at a shelter has shown that they become calmer when the scent of lavender or camomile spread in their environment. Furthermore, the less frequent vocalisation was observed. By contrast, peppermint and rosemary had a stimulating effect on dogs [16]. 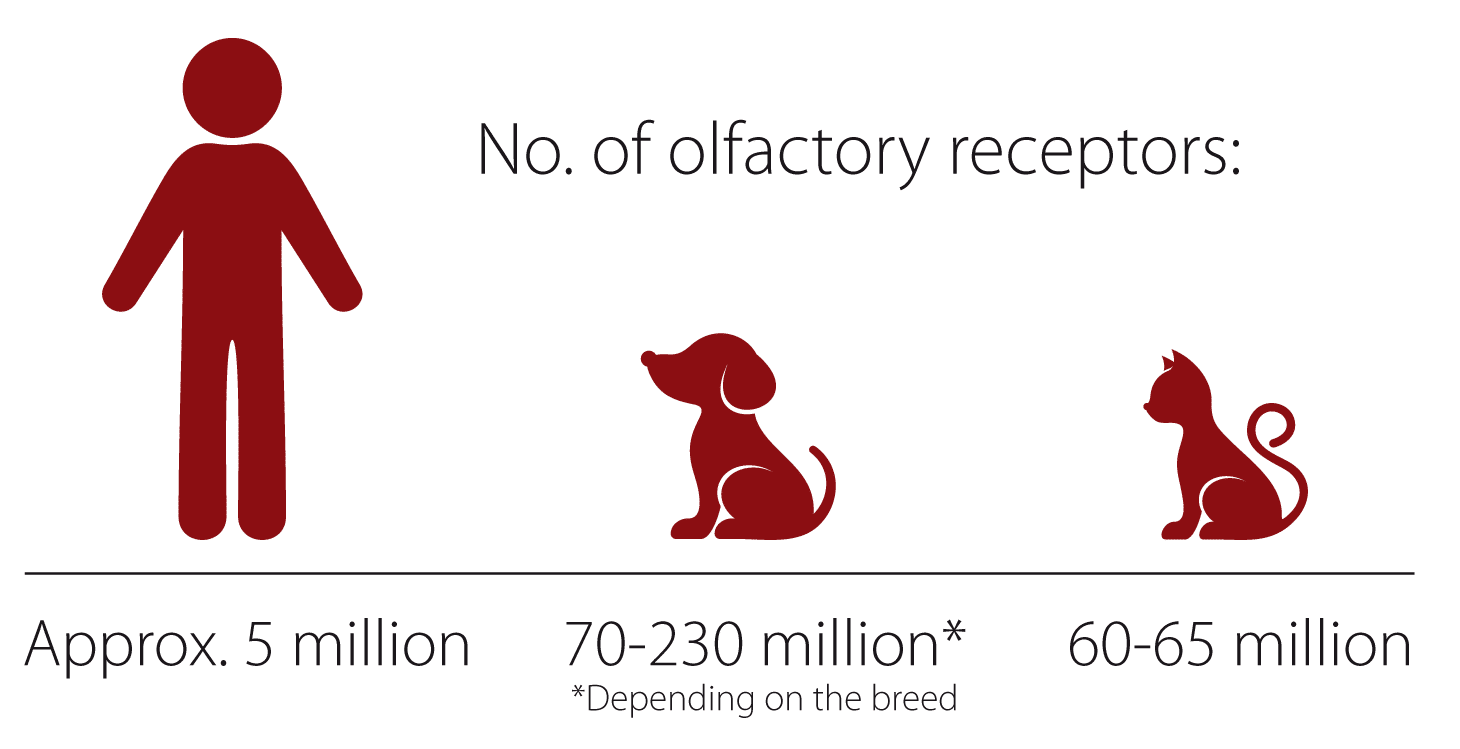 The knowledge of scents can also be used for grooming. As you know, most dogs do not like bathing. If you choose unscented products or products with lavender, you will not cause any additional stress to your dog. If you use lavender, you can even reduce stress.

Scents are also helpful if you want to discourage your dog from certain behaviours. For this purpose, preparations with a strong citrus note, commonly known to be very unpleasant for dogs, are typically used.

From the scientific point of view, smell is a key sense for dogs, indispensable in social contacts. They use smell as a primary means of communication, i.e. for exchange of information within the species. If you try hard to hide your dog’s smell with another smell, intense and pleasant to you, you may make your dog feel less comfortable. Dogs having an odour they do not like will try at all costs to get rid of it, for example by rolling themselves in another scent, the one which is more pleasant for them (and not necessarily for human). Therefore, when grooming your dog at home, remember to use unscented cosmetics or those with lavender if you want to provide a sense of emotional comfort for them.

Due to the huge differences in olfactory perception between macrosmatic animals (i.e. with an exceptionally well-developed sense of smell, such as dogs and cats) and microsmatic animals (with insignificant role of smell, such as humans), what you find pleasant can be a nightmare for your dog’s nose. Having this knowledge, you can consciously decide what scents you want to surround your dog to influence its welfare and well-being [17].